This One’s For the Girls

You are here:
Home » Buzz Article » This One’s For the Girls 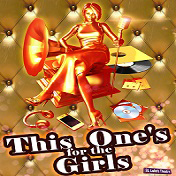