Love Letters: You Can’t Help But Love this Broadway Revival

You are here:
Home » Buzz Article » Love Letters: You Can’t Help But Love this Broadway Revival 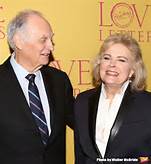