You are here:
Home » Buzz Article » James Earl Jones in The Best Man by Vidal Get Tony Nom 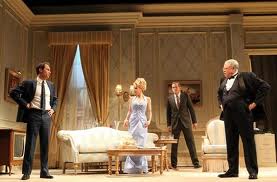