You are here:
Home » Buzz Article » 5 Reasons Why Honeymoon in Vegas may be Broadway’s Next Big Hit 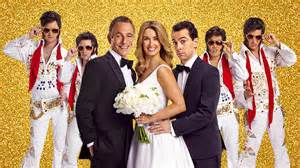