Spider-Man, Turn Off the Dark

You are here:
Home » Show » Spider-Man, Turn Off the Dark 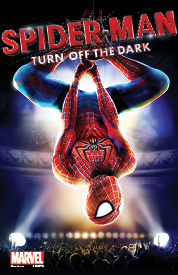