You are here:
Home » Buzz Article » Groundhog Day Musical from London to Broadway! 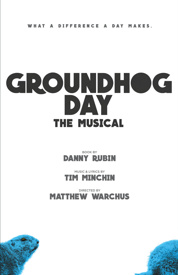