A Limited Engagement and Beautiful Disaster!

You are here:
Home » Buzz Article » A Limited Engagement and Beautiful Disaster! 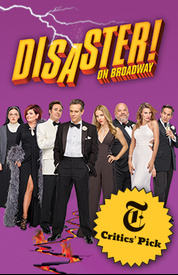